I like a guy who puts on a cape and cowl and goes out into the night to fight crime. I like the colorful, often kooky villains who bring mayhem to Gotham City. I’ve heard some say they like Spider-Man because Peter Parker is a nerdy everyman they can relate to, but not me. I like Bruce Wayne, the broody billionaire. I like the Tim Burton Batman films best of all, because they’re just the right amount of campy without going full-throttle (I am, of course, looking at you, Mr. Schumacher). A superhero story like this should be fun, after all… right?

Batman Begins was a decent reboot (the film that probably kicked off the whole “reboot” trend in the first place) and had a strong villain in The Scarecrow, but it was also a bit disorienting in its action and editing. I don’t think Nolan quite had the hang of it yet.

The Dark Knight, though, was something to behold. How much of that is to Heath Ledger’s credit? A lot — but not all. The Dark Knight was weightier and more morally complex than pretty much any other superhero movie, which isn’t to say it was quite The Godfather, but it did miss a Best Picture nomination by a hair (we assume). The Dark Knight isn’t a flawless movie, but it was big and ballsy in its ambitions, attempting something no other summer action blockbuster had done for a very long time. It brought comic books into the real world, let us see how such events might play out in a mostly plausible way. Yes, the villains were still larger-than-life, as is the billionaire with plenty of cash to throw around on military-grade toys, but everything else was grounded in reality. Gotham City wasn’t just some imaginary metropolis anymore. It was where we live.

So let me begin by saying this: The Dark Knight Rises is pretty spectacular. It sure isn’t a letdown, even after the artistic and commercial heights reached by its predecessor. It feels like a natural continuation of what came before, and unlike most sequels, actually pushes forward the storylines set up in both Batman Begins and The Dark Knight. It’s not just a beat-by-beat rehash of what we’ve already seen, but the final chapter in a true trilogy, a complete three-act story. And, as in some other esteemed trilogies, that middle chapter is far and away the best part.

But I don’t know that anyone even expected The Dark Knight Rises to top The Dark Knight. I didn’t. The Joker is Batman’s best-known nemesis, after all, and his goofy brand of menace has always been the perfect foil for dour Batman. The Dark Knight Rises might have, say, thrown The Riddler up against Batman to try and capture some of that Heath Ledger magic, but it wouldn’t have worked. We’d all be comparing Leonardo DiCaprio or Channing Tatum or Seth Rogen or whoever to Heath Ledger, and it would be quite impossible to top that. Wisely, Nolan did not even try. Bane is the anti-Joker; he makes Batman look like Louis C.K. There was never any question that Tom Hardy’s Bane or Anne Hathaway’s Catwoman was competing with The Joker, the star of the show in The Dark Knight. The Dark Knight Rises, however, is Batman’s movie — for once, the titular hero isn’t upstaged by the rogues gallery (as he has been in virtually every other Batman movie). It’s Christian Bale’s best work in the franchise, since he’s given more to do here. (Though that still does involve an awful lot of brooding.)

The opening act of The Dark Knight Rises is fantastic. We are introduced very early to Selina Kyle, and at first it seems we may be getting another Catwoman origins story (hopefully, one that doesn’t involve mystical cat breath with healing powers — now I’m looking at you, Ms. Berry). But no. Selina Kyle is already well underway in her career as a cat burglar, delivering some appropriately catty one-liners. (This film’s only real stab at levity.) While it goes without saying that she’s no Michelle Pfeiffer in Batman Returns (who ever could be?), she’s certainly no Halle Berry, either. There is a hint of romance between Batman and Catwoman here, though nothing so delectable as that bit from Tim Burton’s film about mistletoe and kisses. (Though a similar scene here, with Bruce and Selina dancing at a masquerade ball, does give us that memorable “There’s a storm coming, Mr. Wayne…” dialogue. Which is good, too.)

Yes, there’s an undercurrent of Occupy Wall Street to this Catwoman, but she’s always been something of a sexy, black-clad Robin Hood straddling the line between good and evil, a feisty underdog (err, undercat?). The Dark Knight Rises doesn’t overdo the financial parallels to our real world, but brings them front and center just enough. (It does give Selina a sidekick, played by Juno Temple, whom I wish we learned more about.)

So rest assured, Selina Kyle fans, these scenes give us just about everything we could want from a Catwoman in a Christopher Nolan film. Maybe it’s only because of my much-blogged-about penchant for bad girls quipping and kicking ass, but she’s actually the best thing about this movie. Her scenes are the most fun, the most Batman-y. We get the sense there could have been a whole movie’s worth of interesting stuff with just Batman and Catwoman in the mix. Of course, there’s something much larger going on here. 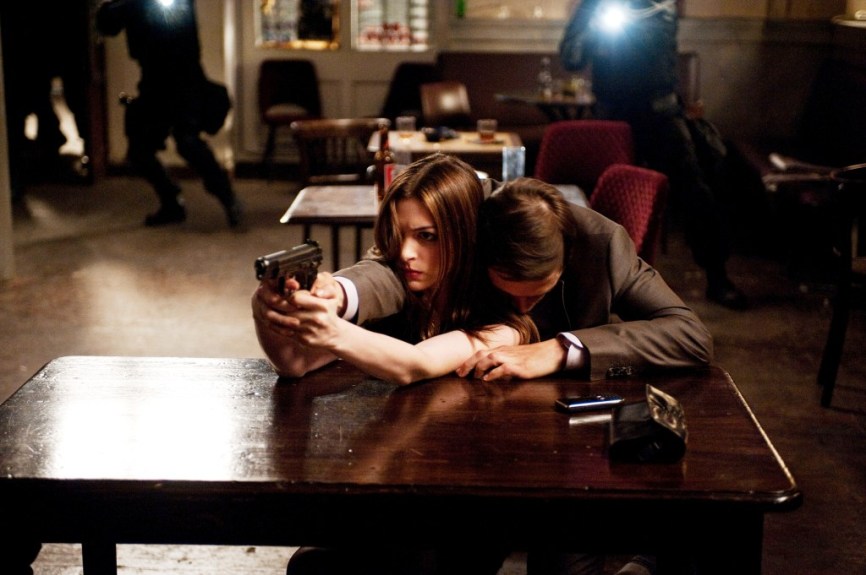 And that something is Bane, as portrayed by Thomas Hardy (not that you’d know it, with that creepy mask). Like The Joker, Bane is out to unleash chaos in Gotham and let its citizens seal their own fates. He’s orchestrated a pretty elaborate plan to make this happen, though his motives are a bit less clear. (But there’s a reason for that.)

Is Bane a formidable foe? Sure. In their first confrontation, he easily hands Batman’s bat-ass to him. And that creepy mask! (The voice is off-putting at first, maybe because it sounded different and less intelligible in the early trailers, but I guess it works.) Like many comic book villains, Bane’s plan ultimately involves detonating a nuclear weapon (resulting in some Captain America-esque plot developments), but there’s a long stretch before that when he isolates Gotham from the rest of the world. To what end, exactly? Well, Bane may be operating with the League of Shadows, that shady organization from Bruce Wayne’s backstory he went up against in Batman Begins. But I’ve always found the Ra’s al Ghul angle the least interesting part of Nolan’s franchise, even if the fanboys dig it. (Do they?) It makes the story so big, with the globe-trotting and ponderous Asian influences. It doesn’t ultimately have much to do with a good man in a mask fighting bad men in masks in Gotham City, which is the real appeal of Batman. It isn’t so much fun.

So, Christopher Nolan — why so serious? Yes, I know this is the epic conclusion to a substantial trilogy, and that sense of doom and scope is part of The Dark Knight Rises‘ appeal. I don’t mind a little gloom‚ honest! But Bane is a bit of a party pooper as Batman villains go. The Joker, for all his twisted carnage, brought a dose of humor to it all that killed two birds with one stone, so to speak. He was terrifying and amusing all at the same time, making for one hell of an entertainment. Here, Bane is terrifying and Catwoman is amusing, but not at the same time. And Bane is never anywhere near as unsettling as The Joker was. He’s too one-note to be all that appealing as a nemesis. As charisma goes in the Batman universe, I’m afraid he’s just one notch above Arnold Schwarzenegger’s Mr. Freeze. At one point, a lot of time passes, and it’s awkward. Nolan doesn’t give us quite insight into what’s really going on here, and Bane becomes a bit inert. In the end, it turns out he’s not as menacing as we though, despite his physical prowess. (It doesn’t help that it feels like an extra hour has been cut out of the second act of this movie.)

I haven’t even mentioned Marion Cotillard as wealthy philanthropist Miranda Tate (Wayne’s female alter ego) or Joseph Gordon-Levitt as the young policeman who knows Batman’s identity. (It’s a big ol’ Inception reunion — five cast members and Nolan!) Both play major roles here, as do returning vets Alfred, Lucius Fox, and Commissioner Gordon. There’s a reason the movie runs two hours and 45 minutes — lots of ground to cover. But it all fits together pretty smoothly, probably more smoothly than even The Dark Knight. I never totally understood why “the hero Gotham needed” had to be Harvey Dent and not Batman  — doesn’t Batman make a whole lot more sense as a symbol of hope? That confusion carries over here, but at least this movie rights it by proving that, actually, it is Batman that Gotham City needs, not some two-faced politician. The Dark Knight Rises has a little less faith in people’s inherent goodness than The Dark Knight did, which seems appropriate, given the world we currently live in. 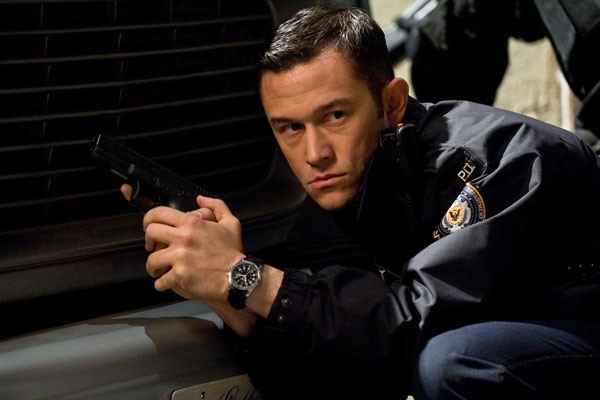 So if it sounds like I’m complaining a lot, well, it’s really only nitpicking. There’s much to admire in The Dark Knight Rises, despite flaws that tend to crop up in a lot of Nolan movies. Yes, sometimes his ideas are bigger than the story he’s actually telling — he’s more concerned with the forest than the trees. And, as good as he is with heroes and villains, civilians have never been his strong suit — so we get a busload of unnecessary orphans in peril. The Dark Knight Rises is about as good as we could have hoped it would be, and I’d say it tops The Avengers by a narrow margin as this summer’s best comic book blockbuster. (But like I said, Batman’s always just been my cup of tea.)

I wish I could discuss the ending, but if I have one major beef with this film, it comes here. There’s one egregious shot that ruins what could have been a wonderfully ambiguous close to the movie. (It feels like the studio interfered, which is dumb — didn’t they notice how much rousing debate the end of Inception incited? This could have sparked something similar.)

But no matter. I might have liked to see a little more of Batman facing off against villains, and a little less of all the other epic, sprawling storylines, since it’s the opening act of this film that feels most cohesive and fresh and exhilarating. But if this is the Batman movie I get, I’ll gladly take it.

Is it really the end? Nolan has said so, but I’m not sure Warner Bros. would agree. There are certainly sequel and spin-off possibilities, even if it’s not Nolan behind them. Can we please keep up this trend of hiring filmmakers with a strong, distinct voice and vision making superhero films? Or is it time to hand this franchise over to the next Joel Schumacher? Let’s hope we the people continue to get the Batman films we deserve. 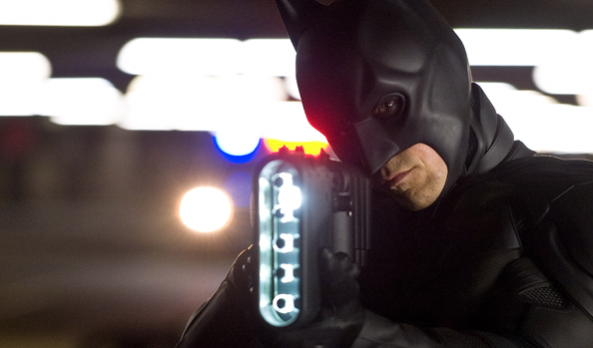 2 thoughts on “Oh, What A ‘Knight’!: Batman Meets The Bane Of His Existence”