Some screenwriters struggle to think up the big dramatic moments in their film, which location to set a key scene in, who their protagonist’s love interest might be.

But not if they’re writing a high school movie!

If that’s the case, the formula is simple. You’re going to have at least one scene at a school dance, one at the Big Game. The movie will end sometime around graduation. The love interest will obviously be the misunderstood, slightly damaged but sweet at the core girl. There will always be a best friend who is loud and borderline obnoxious, a teacher who becomes a mentor and role model. Naturally, a major event will happen at a party when someone’s parents aren’t home. And it helps if your hero can learn something important from a piece of classic literature.

See? The movie practically writes itself!

The fun of a high school movie isn’t in how it surprises us, but in the way it’s executed — the small stuff that happens around and between events like homecoming and prom and graduation. A lot of high school movies are terrible because they’re made by people who are too far removed from the experience to lend it any veracity; its cast may be in their mid-twenties or even older, which makes them look silly when they’re bellyaching over losing their virginity or whatever.

Steven Chbosky’s The Perks Of Being A Wallflower is a high school movie through and through. It indulges in all of the above-mentioned cliches, and yet mostly manages to transcend them. It’s based on Chbosky’s beloved novel (he’s a USC screenwriting alum like yours truly, by the way), the story of a loner who befriends some other misfits and does the same stuff everyone else does in high school, only with a slightly more dramatic than average conclusion.

One element sets The Perks Of Being A Wallflower apart from most high school movies — lots of death. When the film begins, Charlie (Logan Lerman) is traumatized not only by the tragic demise of his aunt (Melanie Lynskey) when he was a young boy, but the more recent suicide of his best friend as well. Maybe that’s why a precocious, good-looking guy like Charlie (aren’t these types always named Charlie?) can be considered a “wallflower,” whereas he seems like he’d be a pretty popular guy at most schools.

As in the book, narration is given in voice over as Charlie writes to a “friend” — often a clumsy device in films, and it is overused here, too, in the beginning. Things pick up when Charlie strikes up a conversation with Sam (Emma Watson) and Patrick (Ezra Miller), who are also outcasts but seem to prefer it that way. (They’re both too vivacious to ever be considered “wallflowers.”) Sam and Patrick take a liking to Charlie, especially when they find out about his recent tragedy, and quickly induct him into their quirky circle of friends. 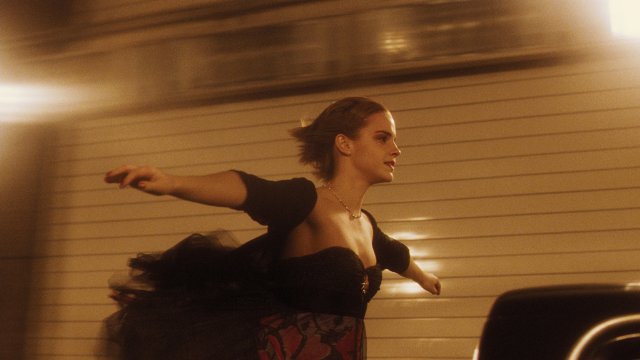 What follows is a story that just barely manages to eschew feeling too rote and by-the-numbers. Charlie dates spunky Mary Elizabeth (Mae Whitman) but really has a thing for Hermione — I mean Sam — who has a thing for Craig (Reece Thompson). (That Emma Watson sure loves her adolescent love triangles.) He also starts borrowing books from his English teacher, played by Paul Rudd. (Who wouldn’t read anything Paul Rudd told them to?) Chbosky’s choices of what Charlie finds cool are authentically high school, but feel a bit forced — The Smiths, The Catcher In The Rye, midnight showings of The Rocky Horror Picture Show. Most conspicuously, the trio hears David Bowie’s “Heroes” at a pivotal moment and spend the rest of the movie trying to figure out what song that was. That would work a lot better with a more obscure track. (But since the movie is a period piece, at least we know they can’t just Shazam it or Google the lyrics.)

The story isn’t strong enough to rely on that alone for a compelling film, and Chbosky’s direction (and the film’s editing) have some distinctly awkward moments. So it’s up to the film’s young cast to carry the movie — and I’m happy to report that they succeed with flying colors.

Though he may be a bit miscast as a “wallflower,” Lerman is as convincing as he can be as Charlie, selling both his innocence and a slightly darker side that emerges later in the movie. Emma Watson is also pretty fantastic as Sam, despite one or two slips into Britishness — the chemistry between the two is great, and the screenplay gives them just enough of a romance without tipping the story too far into saccharine teen love territory. The rest of the young cast — Whitman, Johnny Simmons, Nina Dobrev, Erin Wilhelmi — is similarly solid.

The adults are a little iffier. Rudd is good, though perhaps a bit too charming to be bought as an average English teacher. Joan Cusack’s brief appearance as a doctor doesn’t seem to require her star power. Dylan McDermott is seriously miscast as Charlie’s Pittsburgh fuddy-duddy father, who calls his son “champ.”

But it’s Ezra Miller who’s the real scene-stealer, and who emerges as the star of the movie. He’s a phenomenal sidekick, exactly the sort of gay character a teen movie in 2012 needs — witty, stylish, comfortable but not too comfortable with his sexuality. He’s not a cliche. Other stories might have had him secretly pine for the heterosexual protagonist, but this movie hardly broaches the subject of an attraction between Charlie and Patrick at all. Miller has true charisma and elevates every scene he’s in; he makes The Perks Of Being A Wallflower at least twice as good as it’d be without him. Hopefully Hollywood can find more for him to do in future movies; he has the manic energy of Heath Ledger’s Joker, and that’s nothing to sneeze at. Someone get this kid a Batman movie!

The Perks Of Being A Wallflower takes a somewhat surprising turn in the third act. I didn’t see it coming, and it only halfway works, but you gotta give it points for daring. Perhaps too much of the novel is stuffed into this screenplay, so that a few disparate elements don’t add up — none of the stuff with Charlie’s parents or sister needed to be here. The film’s best moments are, not surprisingly, the most “high school” ones — the romantic tension between Charlie and Sam, driving around aimlessly in search of adventure, the genuine. believable camaraderie amongst this group of friends. (A scene featuring them exchanging Secret Santa gifts gets the details especially right.)

The Perks Of Being A Wallfloweris rough around the edges — awkward at times, still finding itself, just like its teen protagonists. It has many familiar elements and follows the typical high school movie formula, but still manages to pack in a small surprise or two. It works more often than it doesn’t, and will likely take you back to your own high school experience once or twice.

If The Perks Of Being A Wallflower were any other kind of movie, we might demand a little more originality, or wish it delved a little deeper, or expected all the many plot threads to cohere. But since it’s a high school movie, the bar is set fairly low and we can just enjoy it for what it is. That’s one of the perks of such a movie.

*
(Originally posted on Justin Plus Six.)

One thought on “‘Wallflower’ Children: The Perks Of Being A High School Movie”