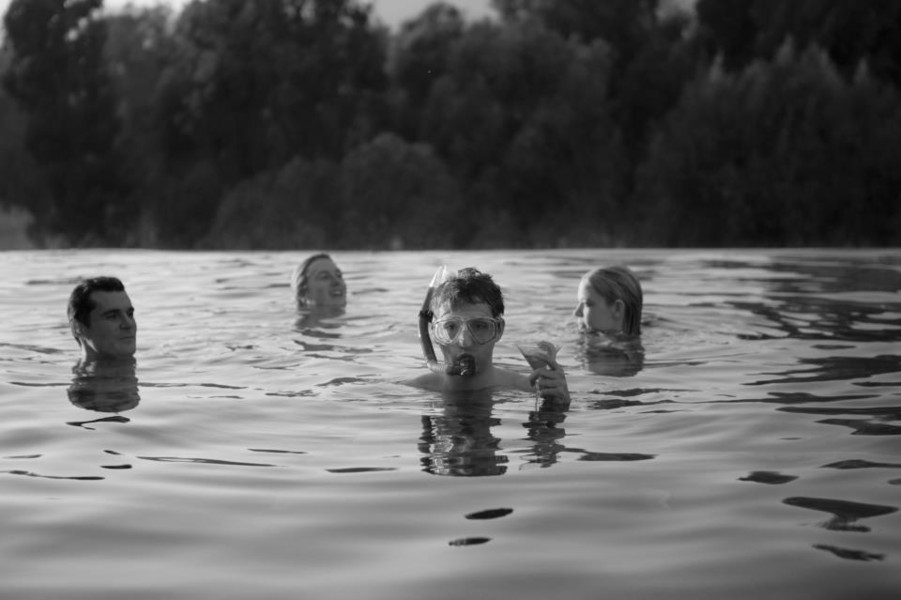 I have yet to see a single blockbuster this summer. No Iron Man, no Gatsby, no Fast & Furious, no Star Trek. It’s not that these movies are totally unappealing, just that there’s always been something more enticing playing on fewer screens.

So Joss Whedon’s Much Ado About Nothing really shouldn’t feel like such a breezy and refreshing change of pace. It does, though. There’s a do-it-yourself, “let’s put on a show,” anything goes spirit to it that makes it feel less like movie and more like a home video, albeit a pretty classy one shot in black-and-white with the rich dialogue of William Shakespeare to boost its credibility. Many of Whedon’s projects have had a similar “the gang’s all here” vibe in front of and behind the cameras, but this one outdoes them all in that sense, shot on the DL at Whedon’s own house.

The story is one of the Shakespeare comedies I’m unfamiliar with, though I’ve quite enjoyed As You Like It, A Midsummer Night’s Dream, The Tempest, and The Merchant Of Venice either by reading them, watching a film, or seeing them on stage. Like many of Shakespeare’s works, the focus is on multiple pairs of lovers in various states of confusion, including a nice ruse in which a man’s intended bride pretends to be dead only to “surprise” him on their wedding day. (I doubt this would go over well in modern times.) As often happens with highly stylized language, it takes about ten minutes to settle into the groove and understand what the hell everyone is saying, but once Much Ado casts its spell, it’s quite charming.

The central players are Beatrice and Benedick, played by Amy Acker and Alexis Denisof. Both have sworn off love, and yet love to hate each other. You need only have seen any romantic comedy ever to understand how this will end. The cast includes alums from virtually everything Whedon has been associated with in his post-Buffy career, from Angel to Firefly to Dollhouse to The Cabin In The Woods to The Avengers. The cast is more or less up to the task, though not all performers are necessarily the ideal actors for Shakespeare — I was particularly impressed with Reed Morgan, Jillian Morgese, Sean Maher, and Fran Kranz. No one in the cast is exactly a household name, with Agents Of S.H.I.E.L.D.‘s Clark Gregg probably the most familiar (or maybe Nathan Fillion, in a minor part). That’s part of what’s fun about it. These are all essentially TV actors playing somewhat out of their comfort zone (though I imagine most if not all are regulars at Whedon’s storied Shakespeare reading parties).

The black-and-white gives the film a lush quality that, along with the modern setting, gives us the sense that we can’t take any of this literally. (The story doesn’t technically make any sense set in this day and age, but you just have to go with it.) The film features very good original music by Joss and his brother Jed, and it ebbs and flows in terms of how engaged we are in the actual storyline. A party sequence wonderfully captures a Shakespearean mood of celebration, while other plot points are a bit harder to swallow. (A lot of confusion could be avoided if characters just decided to speak up a little earlier, one of the disadvantages to this not taking place in 16th century Italy, when passing information along must have been a much slower process.)

But why gripe about a film like this? Shot in 12 days, it feels like it was made more for the enjoyment of the cast and crew than any particular audience, but that rubs off on us. Despite a few heavier dramatic moments, Much Ado About Nothing is essentially a light and fizzy comedy, and much of Shakespeare’s humor is executed wonderfully. And in this current climate, when so many films — even the smaller ones — feel calculated, a film that might feel “inessential” like this one actually does matter. Because we’re seeing it. A black-and-white film with zero big stars shot at the director’s house is getting some attention. Regardless of its quality (and it is pretty good quality), it’s just great that this movie exists at all.

It hadn’t occurred to me before, but now that his name has been invoked, I have to wonder — is Joss Whedon the modern-day Shakespeare? Well, who else is so deft and mixing humor and drama? Who else can so nimbly move between tragedy and comedy? Joss Whedon paints on just as large a canvas as Shakespeare ever did, with dynamic lead characters and ensemble casts that always manage to steal a moment or two. Okay, so maybe it’s a bit of a stretch, but who else would have been able to throw a few Shakespearean flourishes into even The Avengers?

There’s a reason we’ve been making much ado about him all these years, and with this he proves that a blockbuster under is belt hasn’t changed him much. There aren’t many filmmakers who would release The Avengers one summer and a micro-budget black-and-white Much Ado About Nothing the next, but that’s what makes him so great. Like Shakespeare, he keeps us on our toes.

2 thoughts on “‘Nothing’ Really Matters: Is Joss Whedon Our Shakespeare?”