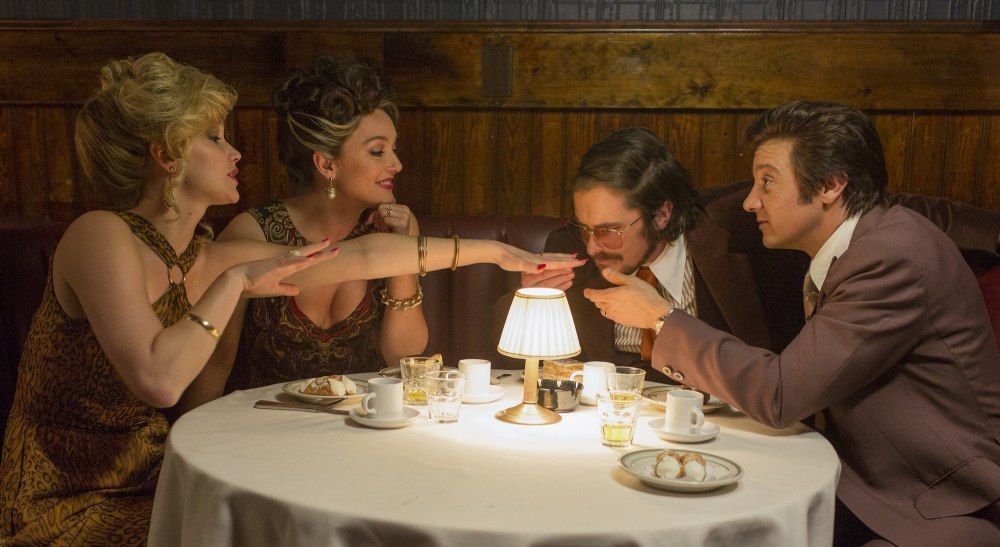 Hey, Academy, are you paying attention?

But of course you are! Here’s a movie featuring a whole bunch of last year’s Oscar nominees, including several past Oscar winners, made by a guy who’s made two Oscar favorites in the last three years. (And now one more.) Basically, there was no way in hell American Hustle wouldn’t be a part of the Oscar conversation this year. And it is.

American Hustle is the partially true story of the controversial Abscam operation carried out by the FBI against some high-ranking politicians, mainly by accident (or so this movie says). Except it’s not really that story, because the Abscam hijinks are actually David O. Russell and co-writer Eric Singer’s excuse to explore a variety of swindlers, colorful characters all, who hustle in a variety of different ways. (The script’s original, even more fitting title was American Bullshit.)

The plot is a little twisty-turny, but as you might expect from the man who recently made The Fighter, a boxing movie that was not so much about boxing, and Silver Linings Playbook, a movie that mixed gambling and romance and mental illness into a wholly unique concoction, American Hustle is much more interested in the relationships between these characters than it is in the plot or politics of what happened. And I’m all for that — we’ve seen enough movies about clever swindles, which tend to hinge on one clever third act “gotcha” and little else. But we’ve never seen an ensemble quite like this.

Amy Adams plays Sydney, who falls hard for the paunchy but charismatic Irving Rosenfeld (Christian Bale), whose “elaborate” comb-over is the star of the film’s very first scene. (Several key characters are shown taking great pains with their ‘do — yes, even these people’s hair is bullshit.) Irving makes a living by screwing people he considers “bad” out of their money; when Sydney finds out, she’s oddly intrigued, and decides she can prove to be a valuable asset in the operation, thanks mostly in part to an ability to take on a pretty good British accent. But ambitious FBI agent Richie DiMaso (Bradley Cooper) enters the equation and shakes things up, setting his sights on taking down a possibly-corrupt New Jersey mayor and finding that their scheme keeps taking them higher and higher up the ladder. The movie begins as a love triangle, evolves into a love rectangle, then turns into a love pentagon… and so on. The reasonably late addition of Rosalyn (Jennifer Lawrence), Irving’s loose canon firecracker of a wife, to the mix, really shakes things up.

Where the story goes doesn’t much matter. This is a movie featuring five supremely talented actors (Oscar nominees all); they’re dressed up in outrageous 70s clothes with their own “elaborate” hairstyles, and they all seem to be having a good time. For once, Amy Adams gets a lead role rather than a supporting one — more predictable casting would have seen her take the Jennifer Lawrence role and vice versa, but it works. The two women share an exceptional scene in the restroom of a casino, one of the film’s many standout moments that has nothing whatsoever to do with moving the plot forward, and everything to do with showcasing intriguing dialogue spouted from the mouths of these dynamic, beloved performers. 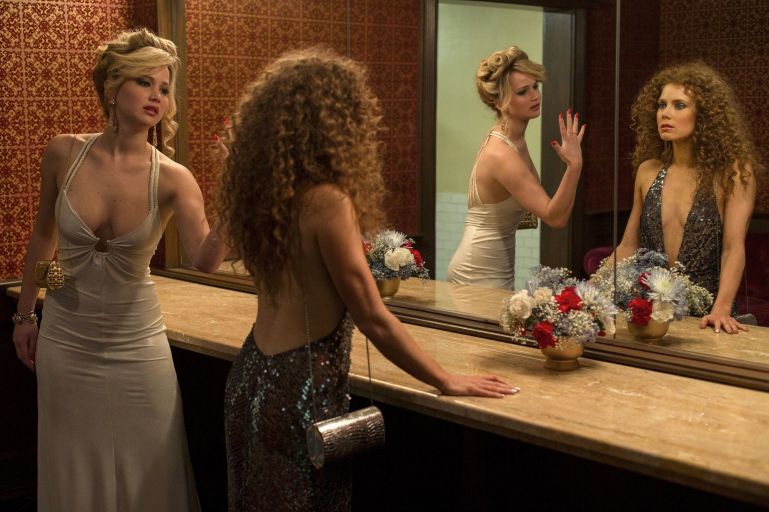 Each character is a bullshit artist in their own way. Everybody’s using what assets they have to scam the others, whether it be sex (Sydney), the law (Richie), smarts (Irving), or a man’s love for his child (Rosalyn) — in fact, the most genuine character on screen is probably the “corrupt” politician, Mayor Carmine Polito. (He and his wife, played by an unrecognizable Elisabeth Rohm, feel like they wandered over from a Sopranos dinner party.) Jennifer Lawrence’s Rosalyn is, in some ways, the film’s most fascinating (and least seen) character, who only makes an impact in the second half of the film — she has the film’s funniest lines in a showy performance that’s sure to nab her an Oscar nod (and quite possibly win her another). “Thank God for me!” Rosalyn says at one point; Lawrence should probably thank God for Russell.

American Hustle very much feels like David O. Russell “doing” the 70s — in particular, Scorsese influences are all over the place. (A cameo from Robert De Niro playing a mobster sure doesn’t hurt.) As in his previous films, Russell’s directorial flourishes are far from invisible, but they make otherwise standard fare more interesting than it might otherwise. (It’ll make a fabulous double feature with Boogie Nights.) The movie’s tangents and indulgences tend to be its most delightful moments, while the actual story gives us less to chew on. (There’s a nifty sequence where Amy Adams and Bradley Cooper dance 70s-style, and another with Jennifer Lawrence doing a radical sing-along to Wings’ “Live And Let Die.” Necessary? No. Fun? Yes!)

Something about the film as a whole feels rather inconsequential. The Abscam story isn’t all that monumental as told here — it’s a crazy whim that spiraled out of control, and quite possibly never should have happened in the first place. Maybe the fact that nearly everyone is manipulating everyone else makes it hard to find any one character to really grasp onto — we’re constantly guessing at whether these people have genuine feelings for one another, or whether they’re just playing each other. The film shifts its focus between different relationships at different points in the movie, so we get fascinating moments between Adams and Cooper, Adams and Bale, Bale and Renner, Bale and Lawrence — with none of these exactly emerging as the focal point of the movie. Even Adams and Bale get lost for what feels like long stretches.

It’s a movie to see primarily for the performances, which have already divided critics. Lawrence again plays a character who feels a little older than the actress is herself, but for me, it totally worked. She’s the movie’s best bet for an Oscar. The Best Actor race is too crowded for Bale this year, though he’s good, too — though I question his casting a bit. Even with some weight gain and a gnarly comb-over, the man is maybe more attractive than he should be; why not just cast a legitimately beer-gutted actor? Amy Adams should find herself up for Best Actress after four Supporting Actress nominations under her belt, but she’ll likely be edged out to make room for the older vets (Emma Thompson, Meryl Streep, Judi Dench). I really enjoyed Bradley Cooper’s wacky take on an FBI agent who should probably not be in a position of power of any kind; then again, Cooper and Lawrence seem to be acting in a movie that’s slightly funnier than the one Renner, Adams, and Bale are in. Believe it or not, it’s Louis C.K. as DiMaso’s FBI higher-up who ends up being the straight man in this crowd in American Hustle‘s most underplayed performance. (I’m not sure the role totally works, but it has its moments.)

I seriously enjoyed American Hustle. It’s hard to find much to say about it. It’s a mess, but it’s a whole lot of fun — not so much a story as it as a movie. The hair, the costumes, the performances, the camera angles, the music — it all feels self-conscious. You’ll never forget you’re watching a film. But do you need to?

American Hustle is about a group of con artists getting together to put on a show and captivate their audience, wrestling a few dollars out of them in the process. David O. Russell and company are mainly just playing around here, and even so, the film is one of the fixtures of awards season buzz. So who’s conning who here?

At the end of the day, movies are just lies we pay Hollywood to tell us, to make us feel better for a little while. David O. Russell is likely aware that in America, Hollywood is the biggest bullshitter of all. And like Irving Rosenfeld, and a good many other Americans, he’s totally okay with making his living as a hustler.