* based on absolutely no criteria whatsoever

It’s almost summer again (here in Los Angeles, anyway — the rest of you may have another month or two before it’s good and sunny out). And that means it’s time to listen to some good fucking songs. Because the best fucking songs sound the very best when it’s nice out, and you’re laying by the pool or at the beach or driving around in a convertible.

It’s been quite a while since I compiled a list of The Best Fucking Songs, which is (like all music lists) totally subjective and impossible to definitively quantify. Everyone has a different taste in music, and it’s a bit harder to say whether a song is good, bad, or the best compared to a movie or a TV show. I don’t know why, but that’s the way it is.

Disclaimer: I have not heard all of the new music in the world, or even that much new music lately, yet I’m fairly confident in my selection of these songs as at least amongst the best.

Sorry, everybody else. My very new favorite musical discovery all-around is Donkeyboy. I’m not sure where I was when they emerged onto whatever scene they emerged onto, but clearly I wasn’t there, and I’m a little mad at everyone in the world for not alerting me to their presence sooner. If you know anything about my musical tastes, which are rather clearly laid out in posts like “The Best Fucking Songs Right Now,” you will know that this music is essentially tailor-made for me.

Donkeyboy is reminiscent of previous Best Fucking Songs selection Sound Of Arrows, except a bit more upbeat and dancier. They hail from Norway — because almost zero of my Best Fucking Songs artists ever hail from the good ol’ USA, which gives us artists like Miley Cyrus and Jason Derulo instead — and have that artful Euro-pop appeal that seems almost impossible to emulate stateside, given that no one does it. (Of course, the rest of the world is fonder of artful Euro-pop than we are, for whatever reason.)

I stumbled upon Donkeyboy with the single “Triggerfinger.” While watching the female vocalist in the video, I thought, “Hey! She looks familiar!” A quick search confirmed that she was Kiesza, another previous recipient of my Best Fucking Song honors (and whom I hung out with a bit on my last night as a New York City resident). I was very pleased to see two talents come together like this, and “Triggerfinger” is a beautiful and hypnotic song.

A little more digging led me to Donkeyboy’s 2011 release Silver Moon, which is home to several more great songs, as well as their latest, “Crazy Something Normal,” which is a slight departure from the Silver Moon sound, but not radically. It’s a track that reminds me of “Young Folks” by Peter Bjorn and John, and hopefully will be a similar breakout hit here. Needless to say, I’m much looking forward to Donkeyboy’s forthcoming album which contains “Crazy Something Normal” and presumably “Triggerfinger.” Until then, let me highly recommend those tracks as well as “Get Up,” “Out Of Control,” and “Pull Of The Eye.” Seriously, more Americans need to jump on this bandwagon with me. There’s room.

And now, the rare appearance by an American on my Best Fucking Songs list — the Los Angeles native Sky Ferreira. She’s been on my music radar for a few years now, since she was breaking out back when I was writing for Idolator. Then I started writing less about pop music and she fell off my radar. So recently, I was surprised to hear her new album recommend by sources who might not have enjoyed her poppier tunes from a few years back.

Sky’s Night Time, My Time is a very listenable record that I suppose you would still classify as pop — especially a couple of the catchier tracks like “You’re Not The One” and “Love In Stereo.” But it’s also a touch darker and more melancholy than you might expect from a talent who also moonlights as a model/actress, and whose first EP was titled As If.

All of Night Time, My Time is pretty solid, but the track I find myself listening to most is “24 Hours,” in which Sky sings about how she’s got exactly one day left with her love. (It’s unclear where he’s heading in 24 hours… prison, maybe?) It’s upbeat and catchy, but at the core, mournful — as a lot of the best pop songs are. And if you like “24 Hours,” there’s a good chance you’ll like the rest of Night Time, My Time too. Most highly recommended: “I Blame Myself,” “You’re Not The One,” and “Love In Stereo.”

In addition to Kiesza, who snuck in thanks to her Donkeyboy collaboration, we have another returning champion on this Best Fucking Songs list. That’s Andreas Moe, from Sweden, also known as pretty much the best place to find music I will like.

Andreas Moe first came to my attention with his badass “Long Time” remix video (a collaboration with John De Sohn. I then discovered that “Long Time” was actually a beautiful acoustic song when stripped of its techno beat (and the bloody children from the music video). It appeared on his Collecting Sunlight EP, which was similarly soft and melodic, with light electronic influences.

The This Year EP continues in a similar fashion. It’s a year old, but I only just found it, and Moe’s forthcoming Ep isn’t due until June. This is the kind of music I often find too earnest or schmaltzy from other artists, and isn’t exactly my speed, but for some reason, the way Andreas Moe does it just works for me. Get it!

Australia’s Betty Who just released her Slow Dancing EP last week, and I can highly recommend it. That’s how I came across Betty Who in the first place. However, I can’t honestly call any of the Slow Dancing tracks the best fucking song when it’s her previous EP that yielded the one I’ve been listening to non-stop, “Somebody Loves You.” (But they are Very Fucking Good Songs, I promise.)

This is sort of upbeat pop song that tries its damnedest to put you in a good mood, and if you are immune to its charms, you are probably also immune to kittens, rainbows, sunshine, and all other things that are said to bring a smile to a human face. (For the record, I’m not so strongly endorsing the micro-budgeted 80s-tinged music video, which is only so-so.)

I really feel like I should be promoting Betty Who’s latest music, which is very good, so check out tracks like “Alone Again” and “Heartbreak Dream.” But since I’d never heard “Somebody Loves You,” I have to imagine that there are many others out there who haven’t either, and may benefit from the sunshine-kitten-rainbow-like effect of it. I’m basically like a doctor here, prescribing you dancey-happiness in sonic form, so you’re welcome.

I heard about Moon Hooch secondhand from their recent SXSW show. They are American, they play what they call “cave music,” and they are two saxophones and a drum kit. And that’s pretty cool. If you’re looking for something offbeat and different, that’s basically Moon Hooch. 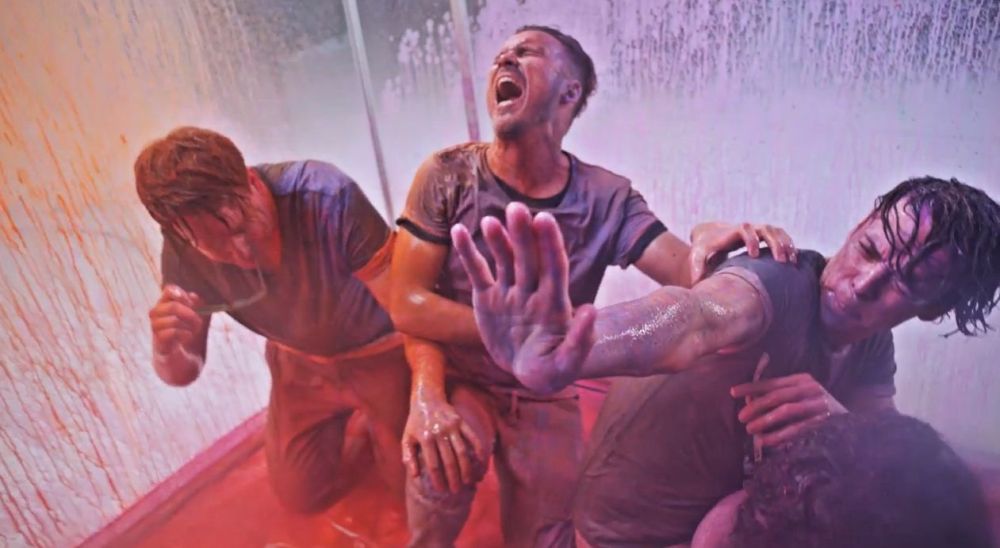 For more of the best fucking songs…