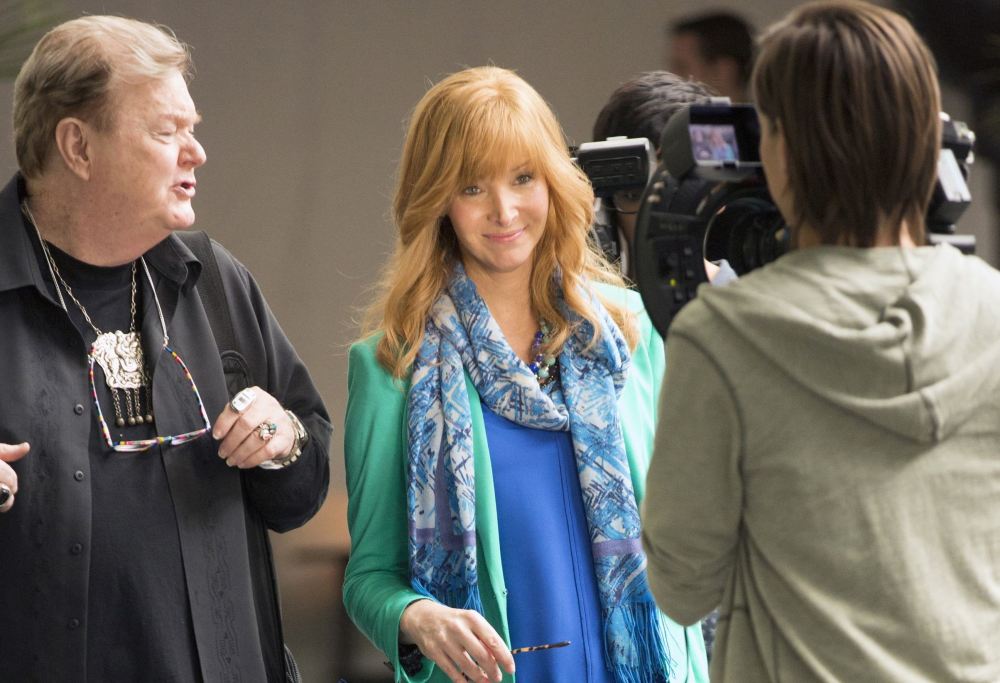 Note to everyone: The Comeback came back.

In 2005, The Comeback was ahead of its time. So ahead of its time, in fact, that no one in the present watched it. It took me only a matter of months to discover Valerie Cherish, but by then the series had already been unjustly canceled following its debut and final season.

The Comeback is the smartest TV series ever made about the entertainment industry. It gets every detail just right, even though those details are comically exaggerated. Room And Bored isn’t that much more awful than a real sitcom, reality TV isn’t that much more shameless than it really was in that era, and we all know plenty of real-life celebs who are as starved for attention as Valerie Cherish. The cancellation was a lame move on HBO’s part, severely lacking foresight, because in the coming months and years, so many of us discovered and adored Valerie Cherish. (Let’s face it: the gays especially.) She paved the way for awkward, borderline abrasive sitcom heroines like 30 Rock‘s Liz Lemon and Parks And Recreation’s Leslie Knope. When sprinkled into the right conversation, her catchphrases are still funny.

That’s why Valerie Cherish is coming back to TV in 2014, nearly a decade after she was given the axe. HBO is correcting a nine-year-old mistake and we, the Cherished, can finally reunite with Red and the gang. This kind of thing was practically unheard of back in 2005, but now we live in a world that occasionally resurrects the long-dead corpses of our old favorites — Arrested Development, Veronica Mars, and now The Comeback. The risk, of course, is that some of the magic will be gone. The new material won’t hold up to the old stuff, and furthermore, we like that old stuff so much that it’s impossible for the new stuff to come close. Is that the case with The Comeback?

I think my feelings about the all-new second season of The Comeback are best expressed in the following GIF.

Yep, The Comeback has still got it. I’m not sure yet if The Comeback is just as good as it ever was, because I’ve found that Season One only got better on subsequent viewings, and I only had time to watch this episode twice. (Yep, twice. And it was better the second time around.) Valerie’s schtick becomes funnier the more you see her resort to the same desperate maneuvers over and over — repetition is how so many of her signature lines became modern comedy classics. (Saying “Jane! “Jane!” while making your hands into a “T” is never not funny.) Will Season Two’s “Valerie Makes A Pilot” be as amusing with repeat viewings? Who can be sure?

What I do know is that the season premiere satisfied me, a longtime fan, and I’m not an easy critic. Valerie has evolved (slightly), now taking the reigns and filming a reality show of her own. (Actually, it’s a pilot presentation.) In the lengthy opening scene, we get a glimpse at what Val has been up to in the decade since The Comeback debuted. (I’m referring here to the show-within-a-show Comeback, not the HBO series, but I suppose either works.) She guest starred on a medical procedural, got bloodied in a low-quality student film, endorsed her own line of redhead hair products (because “why should blondes and brunettes get all the attention?”), and tried to warn a Real Housewife about the booby-trapped world of reality TV. In the Season One finale, Val learned that being a reality star meant sacrificing her dignity and laughing at herself, and in the years since, plenty of stars, on Bravo and elsewhere, have laughed all the way to the bank on such a philosophy.

As usual, a scene that might seem like a throwaway pseudo-celebrity cameo (Lisa Vanderpump) is actually a sly meta commentary thanks to The Comeback‘s shrewd writing. Valerie Cherish was a (fake) version of a Real Housewife before the housewives were (slightly less fake) versions of themselves. (Valerie supposedly walks off the set of the first season of Real Housewives Of Beverly Hills, though I am now salivating over an alternate reality where she was one of those crazy Bravo bitches.) Yet they, like the rest of the world, must not have been watching, or else they just don’t care. That’s the reality Valerie Cherish faces in 2014: looking like a vain, pompous asshole on television isn’t embarrassing anymore. It’s expected. In fact, it’s totally en vogue.

In the new season of The Comeback, many of our favorites are back, with more on the horizon. Marky-Mark (Damian Young) is still ever-so-patiently putting up with his wife’s shenanigans, and Mickey is of course always by her side (or running after her, panting, comb and hairspray at the ready). Season One surprised us by making the hot blonde starlet Juna a sweet and genuine person, one of Val’s few true allies, and just when it seems that Juna has become too big a star to hobknob with Val anymore, the episode’s sweetest scene arrives when Juna has her driver stop and rushes out of the limo to give her old co-star a big hug. (Meta alert: Malin Akerman is now the star of her own failed one-season wonder,  Trophy Wife, which also deserved a kinder fate.) Yes, I did get a little emotional at this moment.

The 2005 Comeback was meta in that it starred an actress known for a wacky supporting turn on a network sitcom (Friends) as the washed-up star of a network sitcom (I’m It). Valerie Cherish was never a doppelganger of Lisa Kudrow, because everyone knows Kudrow is one of the sharpest comediennes in the business, probably the most respectable of the Friends sextet. (That’s debatable, but she’avoided the pitfalls most of her co-stars fell into, and is there anyone out there who doesn’t like her?) But the 2014 Comeback is even more meta, as the two Room And Bored stars who went on to be stars really did go on to be stars (Malin Akerman and Kellen Lutz), while Valerie Cherish finds herself desired by, of all the unlikely brands in the industry… HBO. Not bad, for an actress whose two claims to fame are a monkey shitting on her head and vomiting in a cupcake costume. “It’s a dramedy. That’s a comedy without the laughs,” is one of this episode’s pointed meta quotes. (The Comeback certainly has laughs, but it’s not an out-and-out comedy, and the humor proved to be too uncomfortable for many viewers back when it debuted.)

(Also: there’s nothing more meta than the comeback of a show called The Comeback, but if I think too hard about it, my brain may explode.)

As in the Season One finale, Val tries to take a stand for herself and ends up getting lured back into the limelight instead. She walks into HBO, all huffy because Paulie G (Lance Barber) has written an unflattering script called Seeing Red about their inharmonious time together. (Technically, it’s about another writer’s inharmonious time on a sitcom with “Mallory Church,” but even Valerie isn’t fooled.) Valerie has a bone to pick with HBO just like Lisa Kudrow does (they cancelled her show!), but all is forgiven in “Valerie Makes A Pilot” when Valerie reads for the part and knocks it out of the park (Just as I assume all is forgiven now that The Comeback is back.)

Smartly, Paulie G’s script doesn’t sound at all like anything we heard behind the scenes of Room And Bored, because his point of view wouldn’t be anything like what we saw on The Comeback. And Paulie G has turned a new leaf, no longer the pompous writer asshole he used to be, instead a more “enlightened” (and sober) individual who constantly sucks on an e-cigarette. It would be easy fan service to make Paulie G the same jerk-off he was in Season One, and allow us to love to hate him again. But The Comeback doesn’t do that. It’s smarter than that, and it’s moving forward.

The Comeback is still The Comeback, updated for 2014 by having Val take a DIY approach to her own image rather than waiting for a network to package her themselves. (One of her crew is a USC student majoring in… Urban Planning.) That’s what’s happening with celebrities nowadays — many of them take their brand into their own hands, for better or worse. Otherwise, we’ve got cameos from reality TV stars (RuPaul, Andy Cohen), physical comedy (Val getting punched in the stomach by Chateau Marmont staff), and moments that blend awkward humor with pathos (Valerie auditioning to play herself, Valerie desperately joining the paparazzi shouting at Juna). As before, the show’s best lines are often so off-the-cuff, it’ll take a few viewings to really pick up on all the comedy. (“That’s right. Privacy’s gone, yeah,” is one of my new faves.) Val has (unfortunately) lost her annoying ringtone but is otherwise the same as ever.

I expect The Comeback to reach even higher heights as this season unfolds. The devil is in the details, and the details are spot on. Valerie Cherish has both evolved and stayed exactly the same, and that is also true of The Comeback. It’s a spoof of life in Hollywood, of the scripted TV business and the unscripted TV business (which are two different beasts entirely). It holds a mirror up to itself first and foremost, and in so doing, holds a mirror up to the rest of us. Most of us will never audition to play ourselves in an HBO project, but now more than ever we can relate to a thirst for approval from the masses. For every moment that Valerie is rubbing elbows with RuPaul, there’s an equally relatable moment when she’s fighting with an unintelligible voice in a parking garage, having lost her validated ticket. I’m not sure how this plays outside of Los Angeles, but if you live here, it’s basically a documentary.

I’m 100% on board with the new Comeback. It’s already hilarious, heartbreaking, and quotable, everything we could ask for. I’ll be back with further thoughts next week. But for now, I’ll leave you with one of this episode’s most memorable lines:

“Valerie Makes A Pilot” A-