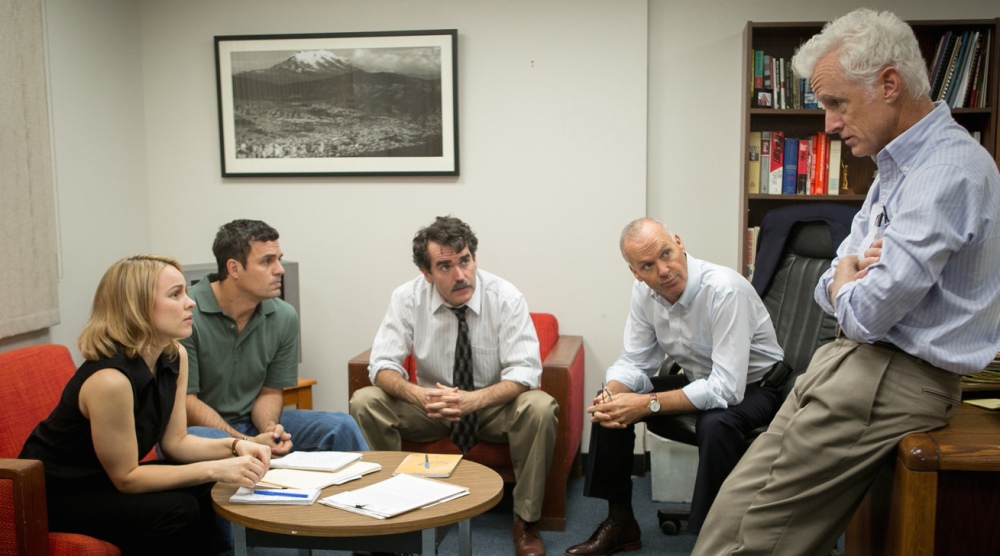 As usual, awards season is officially underway with hopeful contenders stacked one on top of the other. But less usual is the reasonably quiet race we’ve had thus far. There are not thunderously moving, high-impact prestige dramas like 12 Years A Slave or Lincoln, or ambitious cinematic achievements like Boyhood, or industry-pandering fare like Argo or Birdman or The Artist, or actors turning in solid performances who are clearly overdue, like Julianne Moore in Still Alice. There’s no crowd-pleasing blockbuster that could take the cake like Life Of Pi or Gravity. There’s not even as much of the usual middling Oscar bait like The Imitation Game or Extremely Loud & Incredibly Close to contend with.

That doesn’t mean there won’t be. A few notable titles are still under wraps, and their quality could be game changers — most notably, Joy, The Revenant, and The Hateful Eight — but as of now, there’s no true frontrunner in any one race, as there often is by this time most years. The last three Best Picture winners had already been released by mid-November in their respective years, so if 2015 follows suit, then we’ve already seen this year’s Best Picture.

Tom McCarthy’s journalism drama is the most buzzed about awards contender of the moment, and probably the only film that is all but guaranteed a Best Picture nomination. It’s not impossible to imagine it heading for a win, especially if none of the above-mentioned titles turns out to be Oscar-worthy.

Spotlight continues the recent trend of films telling intimate stories about major events in the 21st century, though the scandals depicted here are very much of the century prior. It may take place in 2001, but in many ways, it feels like a 70s movie. The quartet of reporters it focuses on use landlines and books rather than smart phones and search engines, as fits the times, which makes the central action feel more antiquated than it is. It also makes following their journalistic journey more entertaining, since it’s never too exciting to watch movie characters Google something that would have taken a movie character from the 90s a few days to find. Spotlight is aptly being compared to All The President’s Men, as this is another movie about a team of newspaper reporters uncovering a major scandal committed by some very powerful, very revered men. Think of it as All The Church’s Men. (Or, okay, Six Percent Of The Church’s Men, since that’s the estimated number of priests who have molested children, according to one expert in the movie.)

Spotlight takes a workmanlike approach to its topic, with little time for sentimentality or subplots. It tells its story straightforwardly, without delving into the personal baggage of the reporters unless it’s relevant to their work. There isn’t a single moment in Spotlight that is not about these four reporters’ quest to bring the Catholic church’s crimes to light. When we see these people at home, which is rare, they’re working. The team consists of Robby (Michael Keaton), Mike (Mark Ruffalo), Sacha (Rachel McAdams), and Matt (Brian d’Arcy James), and the film spends roughly equal time on all of them. (There is no real lead in this movie.) There is only one scene with heightened emotion, delivered by Ruffalo. Otherwise, everything here is incredibly understated and unfolds as naturally as is possible in a narrative film. There’s a lot of walking and talking, knocking on doors, talking on phones, and telling secretaries that they’re here to see whoever they’re here to see. There are very few overtly cinematic flourishes. The screenplay, by McCarthy and Josh Singer, takes none of the artificial and obvious detours we’re afraid it will. The drama inherent to this story is enough, without the bells and whistles of a three-act structure. Joe Friday would love this movie — it’s just the facts. 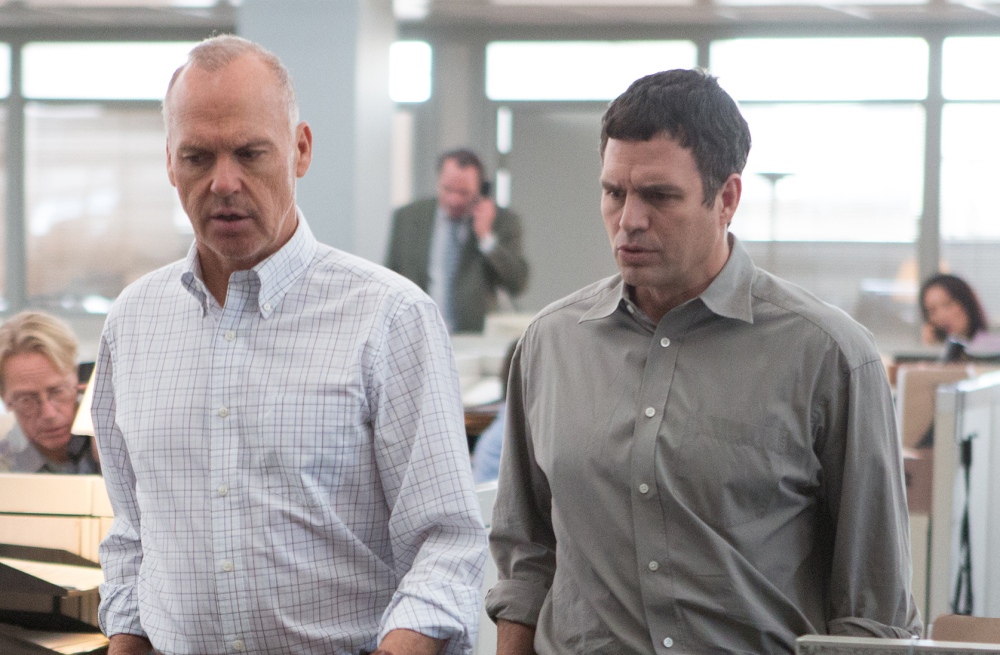 This could be boring, if the subject matter didn’t bring so much to the table already. Instead, Spotlight is rather riveting. The Boston Globe reporters are initially lukewarm on investigating a court case about a Catholic priest accused of molesting children, until some digging reveals that many priests have molested an unthinkable number of children — and the Catholic church has been swiftly sweeping it under the rug for years. This is not news now, of course, but it was back in 2001. One of the most fascinating angles in McCarthy’s movie is the way “the system” in the city of Boston conspires, either willfully or unknowingly, to let these crimes continue in silence. The Catholic church isn’t made out to be a sinister force, exactly — there’s no mustache-twirling villain here, though it’s easy to imagine other screenwriters being tempted to create one. Thousands of people had to look the other way in order to allow this sexual abuse to continue undetected, but Spotlight makes it clear why they did so. It’s not because they’re bad people. They believe in God, and so they believe in the church. How could anything done in the name of God be that wrong?

What Spotlight does very well is make the stakes real and tangible, even without the typical ticking clock or a hackneyed conflict thrown in just in time for the climax. The film’s biggest dramatic turns are about things like unsealing court records or getting data over the phone from a psychologist. But Spotlight also manages to put faces on both the victims and the perpetrators — we briefly meet one priest who happily confesses that he is guilty of molesting children, and then admits to also being a victim of sexual abuse by a priest. Most films would demonize the character, but Spotlight does just the opposite — portraying him as a good-natured but misguided fool.

Even better are the scenes in which we meet the victims, all grown up — most prominently, a straight man who has developed a drug problem, and a gay man who sheds light on his sexual and spiritual confusion when the first person who acknowledged that it was okay to be homosexual was thirty years his senior, supposedly celibate, and appointed by God. With impressive economy, McCarthy shows us exactly who has been hurt by the church’s misdirection, and how. And then he quickly moves on. 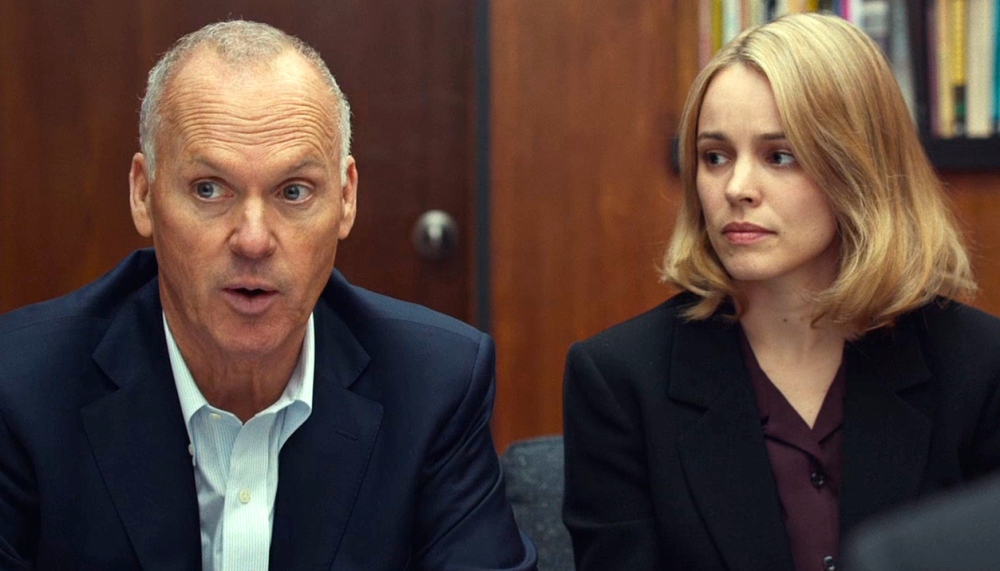 Each of the four reporters has a personal stake in the outcome — Sacha’s grandmother is a passionate churchgoers, Mike finds himself reexamining his lapsed faith, Matt discovers that he lives just down the street from a molesters “rehab,” and Robby discovers that his esteemed, well-established “friends” have known a lot more than they’ve ever let on. But none of this feels forced. We get exactly enough information about each character without ever stopping the forward momentum of the journalistic investigation. It’s the most efficient storytelling imaginative.

Spotlight is also immaculately cast — with supporting turns from Liev Schreiber, Billy Crudup, Stanley Tucci, and John Slattery (making this the second movie of the season that features a Mad Men alum as a journalist, following Elisabeth Moss’ underwritten appearance in Truth — it seems that cast is still the go-to for office settings). The film takes place in the latter half of 2001, which means these characters at one point have to reckon with September 11 — and even that feels subtle. It takes a hell of a storyteller to drop 9/11 into the plot, and then nimbly move on.

Spotlight doesn’t really make any wrong moves. At all. It comes together seemingly effortlessly, without calling much attention to just how good it is, until the film’s masterful final scene, which takes place on the Sunday morning that the Globe‘s story made its rounds in the city of Boston. (The fact that the story was so ironically printed on a Sunday morning is a detail so perfect you’d think it couldn’t be true. But of course it is.) The conclusion says everything without a single word of significant dialogue. You couldn’t ask for a better final scene.

Does Spotlight have what it takes to win Best Picture? Maybe. It’s likely a tad too understated for many viewers to feel passionately about. Best Picture winners tend to be bigger and splashier than this, though Spotlight‘s overall quality is difficult to refute. I would place my bets on another film winning Best Picture at this point, though Spotlight will definitely be in the spotlight throughout awards season, and definitely deserves to be.