“My 9th grade science teacher once told me that if you put a frog in boiling water, it’ll jump out. But if you put it in cold water and heat it up gradually, it’ll just sit there and slowly boil to death.”

“What’s that, Harry? Your recipe for frog soup?”

“That’s my recipe for disaster.”

Don’t look back. The pressure is building. This thing’s exploding soon, and it’s hotter than hell!

One has Pierce Brosnan and Linda Hamilton, the other has Tommy Lee Jones and Anne Heche. Both feature thwarted vacations, youth in peril, charred limbs, and dogs leaping away from lava in the nick of time — but neither was exactly a seismic event at the box office. This podcast once concluded that Twister doesn’t suck, but does Volcano blow? Is Dante’s Peak dormant or active? Which rates higher on the disaster epic Richter scale? In this episode, strong opinions flow like magma until these hosts are toast!

Listen to the episode here. 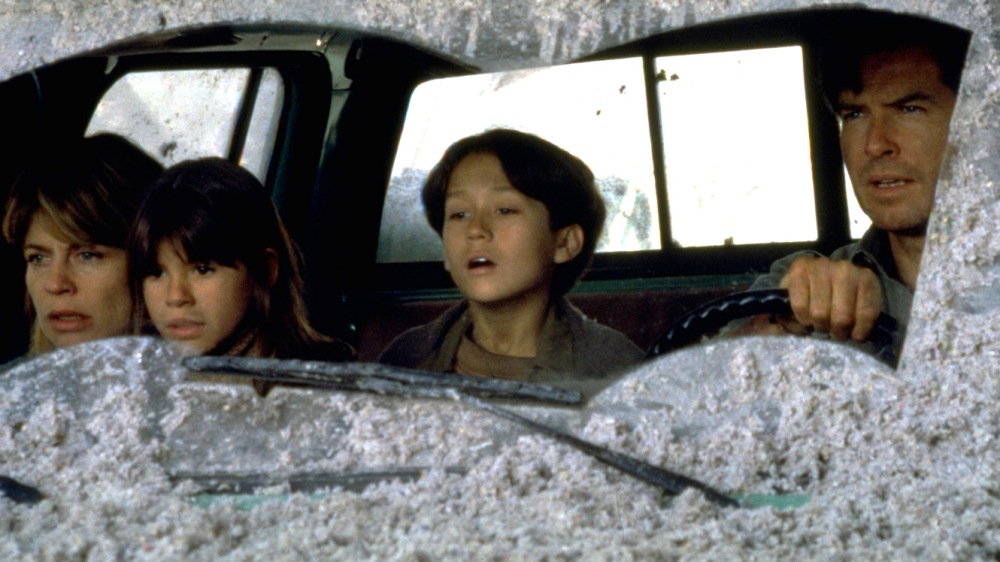 Lisa Alspector, The Chicago Reader: “The movie’s corny and manipulative, taxes your ability to suspend disbelief, and predictably punishes characters for their hubris — all earmarks of a great disaster flick, if the tone is just right. And it is.”

Manohla Dargis, LA Weekly: “Too bad that by the time the volcano shoots its wad, the movie has already died a thousand deaths, ground to a halt by the interminable waiting for the damn thing to blow.”

“The Race To Finish Dante’s Peak” 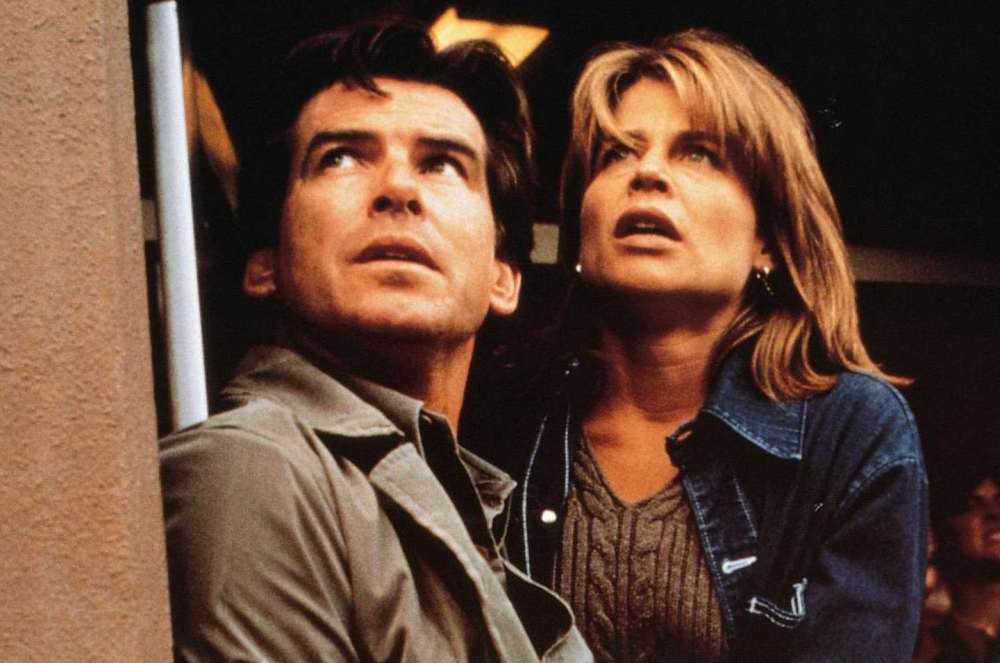 Dante’s Peak holds a special place in my disaster-loving heart. In large part, this is thanks to its Pacific Northwest setting, which looks a lot like some of the towns I spent my childhood in. I’m from Washington, where the real world inspiration for this story — Mt. St. Helens — erupted to devastating effect in 1980. Jamie Renee Smith, who plays Linda Hamilton’s daughter, even reminds me a lot of my sister at that age. There are a lot of reasons Dante’s Peak feels perfectly plausible to me.

A lot of that has to do with the science. Like Twister, Dante’s Peak puts real facts behind the mayhem, making it all the more compelling when things start rocking and rolling.  Director Roger Donaldson’s direction is a cut above a lot of disaster flicks, and the practical special effects hold up a lot better than comparable films’ CG effects do. James Newton Howard’s opening titles and the ensuing score by John Frizzell are appropriately atmospheric. Everything is grounded in human-scale drama — Dr. Harry Dalton squabbling with his boss, the past-their-prime flirtation between Dalton and Mayor Rachel Wando, and the Jaws-like quarreling over what effect a volcano might have on tourism.

Dante’s Peak doesn’t quite have the humor of Twister, which might have helped, but it delivers the disaster goods plausibly, doing an effective job of putting us in the path of St. Helens-like spectacle. A volcano eruption like this is my preferred natural disaster, and Dante’s Peak is my preferred vehicle to deliver it, until further notice. It never really rises above a competent and occasionally very compelling disaster movie, but that was all I needed when I was a teenager, and it still does the trick.

Peter Rainer, Dallas Observer: “Watching this film is a little bit like getting mauled and tickled at the same time. The filmmakers have given the whole shebang a hefty levity, and that’s not easy to accomplish in a full-scale disaster movie.”

Roger Ebert, The Chicago Sun-Times: “The ads say ‘The Coast Is Toast,” but maybe they should say ‘The Volcano Is Drano.’ This is a surprisingly cheesy disaster epic.”

The funny thing about Dante’s Peak and Volcano is how absolutely different they are overall. Both were released in early 1997, and both sought to capitalize on Twister‘s enormous success, but they’re different movies, in my book. Dante’s Peak strives to make its story as science-based as possible, for a Hollywood blockbuster, and Volcano‘s premise is totally absurd. I’m on board with an absurd idea like a volcano suddenly springing up from the loins of Los Angeles, but Volcano does it in the strangest way.

Where is the Hollywood Walk of Fame? Where are Rodeo Drive and Sunset Boulevard? Where is the lava oozing over the Hollywood sign? Volcano has a couple of good LA-centric sight gags, like a flaming Angelyne billboard, but it mostly could take place anywhere. There’s surprisingly little peril for most characters — a lot of the film is spent discussing what should be knocked over in the path of oncoming magma, or going down into tunnels to see if they’re hot. (They are!) Director Mick Jackson, of Bodyguard fame, is obsessed with the Beverly Center, which is where almost the entire movie takes place (without even taking us into the actual mall). In Dante’s Peak, there’s a lot of buildup to the “big show,” but once it gets going, there’s not a lot of time for debate. Volcano erupts and then has its characters bicker over which neighborhoods to save first, with zero stakes. Anne Heche gives the film a little spunk as a geologist, but she has nothing to do here. Tommy Lee Jones is his usual grumpy self. His primary concern in all this is a minor burn on his daughter’s leg.

There is some debate about which volcano movie is better. This is insane. Volcano offers some campy fun, but overall its a misfire as soon as the lava starts flowing. It misses countless opportunities to roast Los Angeles, literally and figuratively. None of the elements completely work. Dante’s Peak does everything better than Volcano. Everything!!