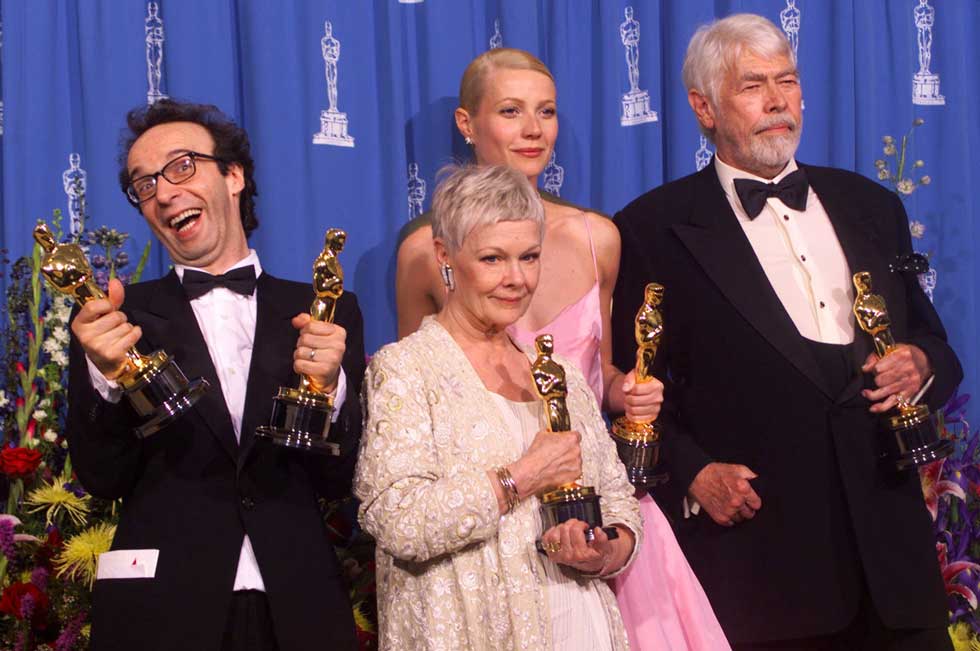 The 1999 Oscars telecast is the most memorable of my youth. Whoopi Goldberg wearing a royal frock and whiteface to portray Queen Elizabeth, a delighted Roberto Benigni leaping onto the seats after winning his first Oscar, Gwyneth Paltrow’s tearful acceptance speech in that pink dress, the Elia Kazan controversy, the Celine Dion backwards tuxedo controversy — it was a hell of a night.

Of course, that’s nothing compared to the weirdness of this year (#OscarsSoBonkers). But never mind about that. Shakespeare In Love‘s triumph over Saving Private Ryan in the big race cemented Harvey Weinstein’s reputation as a devious but very effective Oscar politician, the primary thing he was known for up until his notoriety as Hollywood’s most reviled (alleged) sex offender. (I say “alleged” because I’m still slightly afraid of the litigious bastard.)

The movies themselves were quirky, too, with three set during World War II — The Thin Red Line, Life Is Beautiful, and Saving Private Ryan — and two set in Elizabethan times, featuring Queen Elizabeth I herself — Shakespeare In Love and, fittingly, Elizabeth. If you don’t have World War II or Elizabeth in 1998, you were not getting an Oscar. The big nominees and big winners were Shakespeare and Ryan — the former with 13 nominations and 7 wins, the latter with 11 nominations and 5 wins. Life Is Beautiful, Elizabeth, and The Thin Red Line all had 7 nominations apiece. Benigni’s Holocaust dramedy won three (Foreign Language Film, Actor, and Dramatic Score), the Cate Blanchett costume drama won one (Makeup), and Terrence Malick’s also-ran WWII epic went home empty-handed. These five Best Picture nominees had, by far, more nominations than any other movie that year. The next closest was Armageddon, with 4.

Yes, that’s right — Armageddon got more Oscar nominations than The Truman Show, Gods And Monsters, or Out Of Sight.

I forgot to mention it during the episode, but this was also the most inspiring Oscar ceremony of my youth. Whoopi closed out the ceremony with a heartfelt statement to wannabe filmmakers (and Academy Award winners), encouraging us to follow our dreams all the way to the podium. I’m pretty sure I first rehearsed an Oscar acceptance speech that very night. 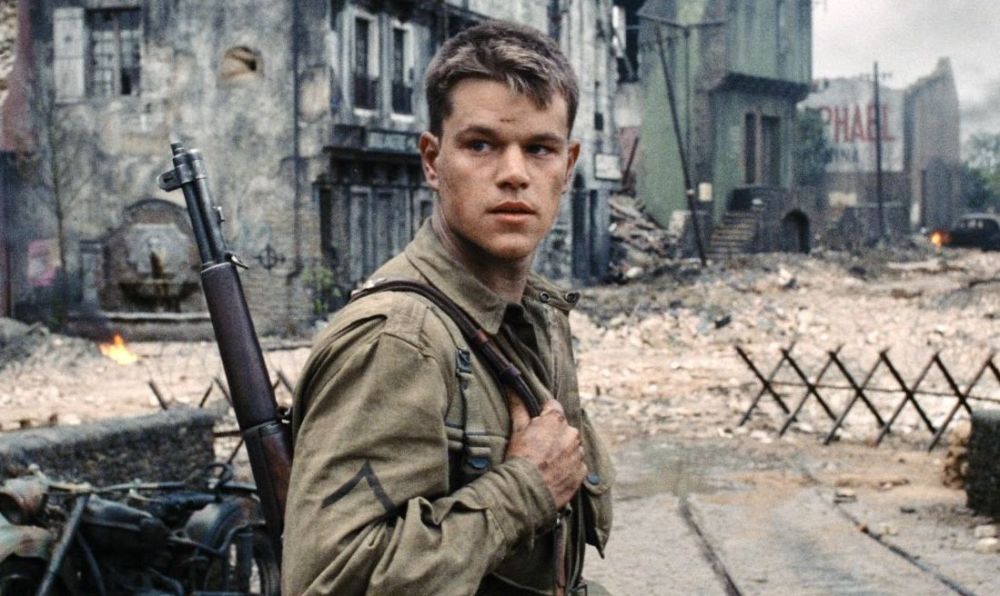 Steven Spielberg’s dark summer blockbuster instantly became the classic war film. The bloody, chaotic D-Day sequence set a new bar for every war film that came after, and maybe even changed the way the average American thinks about war itself. Saving Private Ryan is respectful of the military, but makes it crystal clear that combat is hell. It puts the needless, senseless deaths of countless young men front and center, and doesn’t shy away from the injustice of this early demise.

For most of its running time, Saving Private Ryan is cruel and bleak, killing off nearly every major character — most of whom we’ve grown to like quite a bit. It raises big questions about mortality, and the futility of violence, and subverts the usual heroics of a war film. The most relatable character, Jeremy Davies’ Corporal Upham, not only eschews the triumphant moment we’re expecting for this kind of character, but actively infuriates us when his cowardice costs another man his life. Spielberg also allows lovable American everyman Tom Hanks to perish, despite early indications that he’ll survive. The movie’s entire mission is a moral gray area, sacrificing the lives of several men to bring one back home to his grieving mother.

Saving Private Ryan‘s bookends are unfortunate, not only because they’re directed less skillfully than the rest of the film — which they are — but because they indicate that Private Ryan may indeed have “earned” his survival. He’s a good man with a nice family, so the film leaves us with the comfort of seeing Ryan’s bloodline live on, rather than the discomfort of thinking about the generations of families cut short by the deaths of thousands of other men. It doesn’t diminish the impact of the rest of the movie, but it does limit Saving Private Ryan‘s greatness, turning what might have been a masterpiece into a mere really great movie. Still, at its best — the Normandy Beach sequence, and the theatrical nighttime monologue from Giovanni Ribisi’s Irvin Wade — Saving Private Ryan is one of Spielberg’s definitive films, packing a punch that few other filmmakers ever could match.

Shakespeare In Love is a perfectly delightful piece of entertainment. It has winning performances from a slew of incredible actors, including Judi Dench, Colin Firth, Geoffrey Rush, Rupert Everett, and Imelda Staunton. It has a very witty script from the legendary Tom Stoppard (co-written with the less-legendary Marc Norman, who also wrote Cutthroat Island, and after winning two Oscars for this film, never made another movie again). It also has a reputation for Oscar-snatching, thanks to Harvey Weinstein.

From 1999 on, Weinstein never stopped chasing Shakespeare In Love‘s success, even with much less memorable and successful films (1999’s The Cider House Rules and 2000’s Chocolat were Best Picture nominees, but when was the last time anyone talked about those movies?). He’s behind some of this century’s most controversial Best Picture winners, 2010’s The King’s Speech and 2011’s The Artist, and questionable wins for strong actors like Kate Winslet (The Reader) and Meryl Streep (The Iron Lady). It’s largely thanks to Weinstein that theaters are flooded with precious faux-biopics and twee costume dramedies every awards season.

None of that is necessarily Shakespeare In Love‘s fault, but its aesthetic hasn’t aged that well. It has come to be the poster child for “Oscar bait.” Dench is magnificent as the briefly-seen Queen, and Joseph Fiennes definitely deserved an Oscar nomination for his charming portrayal of the titular leading man. It’s a fun, frivolous film that, ultimately, has very little to say and leaves no emotional impact.

I’m not even mad about it — but in retrospect, I think it’s safe to say that Harvey Weinstein should have fewer Oscars and Saving Private Ryan earned Best Picture. 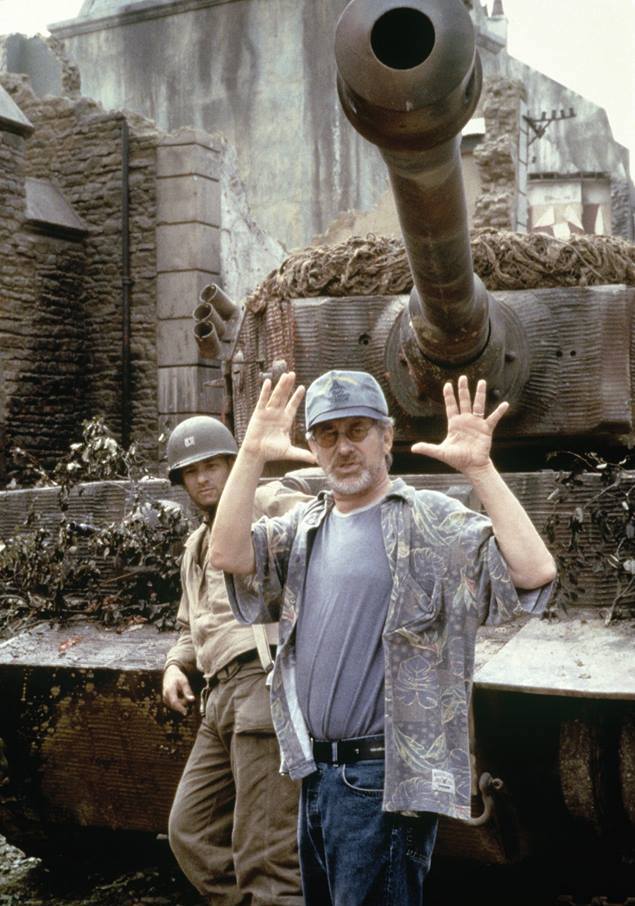